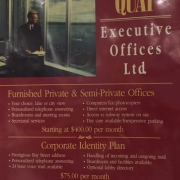 If you know what Seinfeld, VCR’s, The Fresh Prince of Bel Air, flip phones, Tamagotchi’s or Beanie Babies are, then most likely you lived through the 90’s. The Motorola had a wicked antenna Brad Pitt finally got his big break in one of that year’s biggest hits: Thelma & Louise The Internet is made available for unrestricted commercial use and the number of computers on the net reaches 1 million (today there are 3.17 billion people online)

1991 is when The Rostie Group was founded to provide businesses and start-ups with the option of smaller, more manageable space. There were 2 locations, one near the Pearson airport as well as downtown Toronto.

Shared workspaces were called ‘hot desks’ instead of ‘coworking’ and boardrooms looked like this: Believe it or not, The Rostie Group prices were higher in 1991 than they are today! This marketing poster was the first advertisement for The Rostie Group. We still have the same view, and the same phone number. Pretty sure that guy does not work here anymore though.

The Rostie Group office spaces now start at $350. The ‘Corporate Identity Plan’ is now a ‘Virtual Office’ for remote workers and plans are only $69!

Since it is Throwback Thursday, here is one more of The Rostie Group 90’s Reception, one from the 2000’s and finally from today!

There are still friendly fish tanks around the centre, but we have gotten rid of those amazing white leather couches and dark wood. Are the 90’s back in style yet?!