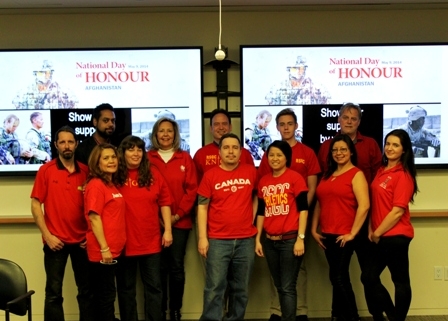 The ninth of May has been officially declared ‘National Day of Honour’. It is an opportunity for Canadians to honour the valour, strength and sacrifices of all those who served in Afghanistan over the last 12 years, including more than 40,000 Canadian Armed Forces members who helped to combat terrorism, stabilize Afghanistan and rebuild the country’s capacity to provide its own security.

A service on Parliament Hill was held today to pay respect to the sacrifices of the wounded and fallen soldiers, as well as the extraordinary burden borne by families. All Canadians paid tribute to the legacy of these heroes by observing a national moment of silence.

At Rostie Group, we went out of our way to dress in red and commemorate this special occasion. All staff members were encouraged to participate and pay tribute on this important day. The Rostie Group has been in business for over 20 years and has worked with a large number of individuals that have connections to the service men and women who honour our country.

“Canada played a central role in Afghanistan for more than a decade. Project by project, kilometre by kilometre, Canadians helped give Afghanistan back to Afghans. With Canada’s help, thousands of members of the Afghan National Security Forces have been trained, hundreds of kilometres of roads have been built or repaired, dozens of schools have been restored, thousands of teachers trained, and millions of children have been vaccinated against diseases like polio. Their valour, sacrifices and remarkable accomplishments in the face of incredible odds will continue to inspire and guide us as Canada continues its development, aid and good governance work in Afghanistan.”

For more information, the official programme for National Day of Honour can be viewed at: http://www.app.forces.gc.ca/ndoh-jndc/assets/documents/ndoh_programme_guide_en.pdf